Join in the Fun at VI Raceweek!

The St. Thomas International Rolex Regatta,Â  the BVI Sailing Festival, and the BVI Spring Regatta, are being held March 27 and April 5, 2009.Â Â  The festivities are held within twelve miles of each other in the charter-friendly Virgin Islands, the world’s most popular bareboat charter destination.

Adding to the temptation are the prizes!Â  The winner of the IRC division will enjoy a week’s holiday on St. Thomas at the Frenchman’s Cove Resort, while the overall leader in the CSA division will win an all-inclusive week’s stay at the Bitter End Yacht Club in the British Virgin Islands.

On Monday, March 30, the BVI Sailing Festival begins at the Nanny Cay Marina in the British Virgin Islands. More relaxed and laidback than the other two regattas, Caribbean yacht charter boats as well as privately-owned vessels race to Bitter End for a chance to win the Bitter End Cup.Â  End of the day entertainment includes cocktail parties, limbo contests, and layday activities. The Sailing Festival ends on Thursday with the Nanny Cay Cup which takes the racers back from Bitter End to Nanny Cay.

The BVI Spring Regatta kicks off on Friday, April 3, 2009Â and caters to a large spectrum of sailing enthusiasts. Choices abound in this regatta from racing IC 24s (modified J24’s), Lasers, and Beach Cats to traditional keel boat racers. While many Caribbean yacht charter enthusiasts join in, others are content to relax aboard their charter yacht vessels and take in the action.

Boats registered in the St. Thomas International Rolex Regatta and the BVI Spring Regatta and Sailing Festival are automatically registered for the 2009 Virgin Islands Raceweek.

For more information, contact your bareboat yacht charter specialist at 1-800-BAREBOAT (www.bareboat.com).Â  “Great Prices and the Newest Bareboats in the World’s Best Destinations” allows 1-800-BAREBOAT to present new yachts such as the Beneteau 43.3; the Robertson and Caine 4600 catamaran; and the Sun Odyssey 39i. 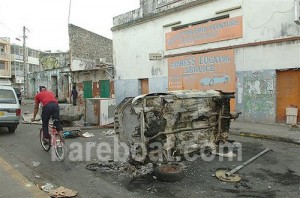 Sailors considering a bareboat charter in the French Caribbean need to be aware of the increasing unrest on the islands of Guadeloupe and Martinique.Â  Of particular concern to those planning a Caribbean bareboat charter yacht vacation is the escalation of unrest.Â  What began as a month-long strike for lower prices and higher salaries has grown into a violent uprising.

Numerous bareboat charter yacht fleets are based in or near Pointe-a-Pitre, Guadeloupe and Fort-de-France, Martinique – both hotbeds for the social unrest in the French Caribbean.

On Tuesday, February 17, 2009, a man was shot and killed in Pointe-a-Pitre as he drove during the night during riots and protests over the high cost of living – the first fatality in a nearly month-old strike that has hammered this French Caribbean island’s tourist industry and paralyzed daily life.Â  Three police officers were also injured in the overnight violence, one with a gunshot wound to the eye.

Guadeloupe, a verdant hilly island with white-sand beaches has been a favorite barefoot sail charter destination for years.Â  Because of the unrest, thousands of tourists have fled or canceled holidays on the normally tranquil island, prompting many hotels to close and cruise ships to head elsewhere.Â  News coverage in the United States has been minimal, and sailors need to be aware of the potential dangers that they may encounter ashore, during a French Caribbean yacht charter.

The Caribbean yacht charter specialists at 1-800-BAREBOAT bareboat.com are advising all clients to revise their sailing itineraries and modify their reservations to pick up and drop-off their rental sailboats and yachts in other destinations.Â  Alternate Caribbean sailing destinations that offer exciting blue-water legs include Antigua, St. Martin, and the spectacular Grenadines in the Windward island chain.Â  For first-time barefoot sailors, the steady trade winds of the Virgin Islands offer a great destination for a Caribbean yacht charter vacation.

Yacht charter customers are also encouraged to consider the purchase of trip cancellation insurance as some policies (but not all) offer protection in the event of political uprisings and social unrest.