“Friends,
This past Friday, we went to Annapolis to visit a recently married friend and take in some of the sights. At the Visitor’s Center, the volunteer said, “Oh, by the way, if you want the best breakfast in town, be sure to go to ‘Chicken Ruth’s’ ” ( at least that’s what I heard).

On Saturday morning, we sought out the place and it turned out to be Chick and Ruth’s and it was packed. The owner, Chick and Ruth’s son, Ted, was everywhere, checking out the service and the timeliness of order taking, etc.Â  Everyone was friendly, and the food was excellent. Ted kept checking his watch and mumbling about “9:30.”Â  We finished (actually just stopped eating — there was too much food to finish) at about 9:25, paid, and were fighting our way to the door through the throngs of people waiting to get in, when Ted got on a PA system and said “OK, everybody! We have a tradition here at Chick ‘n Ruth’s. We will all now stand and say the Pledge of Allegiance. Following that, I have a real treat for you.”Â  It was then I noticed the large American flag flying behind the counter. Everyone in this huge two-tiered restaurant stood in silence until Ted led us in the Pledge.

He then introduced a young man of about 14, who was a busboy we had spoken to earlier. He proceeded to sing the National Anthem. I have to say I had a tear in my eye. When he finished, everyone cheered, whistled, and clapped — then went right back to working and eating. We knew we had again experienced something special in a series of emotional events since 9-11.

Later, we were shopping in one of the downtown shops. I told the shopkeeper of our experience. I then said, “I guess that’s been going on since September 11th?”Â  She said “Oh no. Chick established that tradition when he opened the restaurant in…1969!”Â  He apparently believed that it was important to do his part to reestablish that kind of patriotism in the face of the Vietnam war protesters and other naysayers. His son has carried on the same tradition and so is no Johnny-Come-Lately to patriotism. 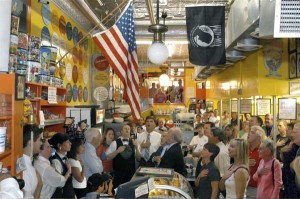 Pledge of Allegiance at Chick and Ruth's Delly

Thanks for letting me share this simple, but poignant story. If you go to Annapolis, Maryland, go to “Chicken Ruth’s” any day between 6 am and 11 pm. During the week, the Pledge is said at 8:30 am and on the weekend at 8:30 and 9:30 am.”Â  …and a special note for travelers:Â  “Chick and Ruth’s Delly” has a bed & breakfast on the 2nd floor called, The Scotlaur Inn.