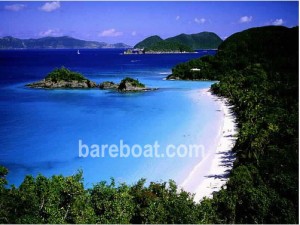 Luxury Comes to Bareboat Charter as The Moorings Renovates their Tortola, British Virgin Islands Base 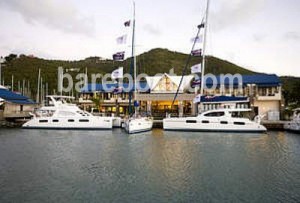 Luxury awaits bareboat charter sailors planning a Caribbean yacht charter vacation.Â  The Moorings, managers of the largest bareboat charter fleet in the Caribbean, proudly opened the new Moorings Village on January 29, 2009. Part of a $15 million expansion by The Moorings of their flagship base in Road Town, Tortola, BVI, the Village brings a touch of luxury to the barefoot yacht charter marketplace.Â  The new facility also highlights the company’s efforts to protect the area’s natural resources.
Caribbean yacht charter enthusiasts, especially bareboat charter customers, will appreciate the company’s commitment to the environment and efforts to preserve the BVI cruising grounds.Â  A new desalination plant provides 60,000 gallons of water daily, while the revamped laundry operation recycles treated water to save 12,000 gallons on a daily basis.Â  There is also pump-assisted flowthrough breakwater in the new marina that can circulate over 50 million gallons of water weekly.Â Â  Local officials believe the new facility has already greatly improved water quality in Road Town Harbor.

The new Moorings Village is nothing short of a luxurious treat.Â  The complex was designed entirely around the needs of sailors.

The staff greets you and takes your bags directly to your barefoot yacht charter vessel while you are greeted in the reception area with a tasty island drink.Â  The reception area opens onto a landscaped plaza, with panoramic views of the Sir Francis Drake Channel. From here, visitors can stroll among the new retail shops or stop in the cafÃ© serving locally-made island pastries, ice cream and gourmet coffee.

Before heading off to sea, sailors can enjoy dinner ashore, at Charlieâs Bar and Restaurant, built over the water and overlooking the harbor, where the coldest cocktails and a sumptuous yet informal menu are offered.

New oceanfront hotel rooms offer luxury accommodation overlooking the harbor, perfect for those sailors wishing to extend their Caribbean yacht charter vacation by a few days.Â  The majority of the existing rooms have also undergone a major renovation. Customers choosing an evening start or simply wishing to freshen up prior to departure will also be able to benefit from the use of a new, modern club-style shower facility with private dressing area.

A full service spa offers the latest relaxing treatments.Â  Sailors who need to stay in touch with the outside world can use the village business center and enjoy free WI-FI internet access.

1-800-BAREBOAT (see www.bareboat.com) is an authorized representative of The Moorings and their global fleet.Â  “Great Prices and the Newest Bareboats in the World’s Best Destinations” allows 1-800-BAREBOAT to present new yachts such as the Beneteau 51.5; the Robertson and Caine 4600 catamaran; and the Beneteau 43.3.