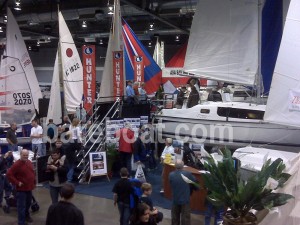 Thoughts of snow and blizzards will turn to dreams of sun and smooth seas as bareboat enthusiasts across the northeast gather in the Big Apple for the New York National Boat Show.

Tens of thousands of boating and fishing enthusiasts start their season at the New York National Boat Show. With its 105-year history the show is recognized as THE place to see the latest and greatest in boating.

The oldest boat show in the U.S. will be celebrating its 106th anniversary next month, Jan 19-23, 2011, at the huge Jacob K. Javits Convention Center in the Big Apple.

If you enjoy the bareboat lifestyle, this first-of-the season show is a must to attend.Â  From yachts and cruisers to bass and pontoon boats, from canoes and kayaks to fishing boats and personal watercraft, from electronics and engines to fishing and dive gear, from financing and insurance to travel destinations, you’ll see it here first.

A new exhibit that caught our attention is the “History of Boating in America.”Â  With so much emphasis on sustainable, green technology, it’s interesting to note the some of the earliest tenders and launches in America were powered by electricity, not fuel!Â  Step back in time to admire the craftsmanship and beauty of bygone eras-a variety of vintage craft will be on display. Highlights include an 1899 Elco electric launch and a fully-restored 1937 Syracuse Electric launch.

Whether you dream of a Caribbean yacht charter odyssey, or wish to consider the purchase of a new boat, we couldn’t think of a better reason to visit the Big Apple.Â  See the boat show during the day and enjoy a Broadway show at night. The city is still quite festive in January.

Contact our bareboat charter specialists online at http://www.bareboat.com/book_now.html or our crewed yacht charter professionals at http://www.1800sailaway.com/contact_us.html to book your own yacht vacation.

Let’s Save the Great Lakes from Asian Carp Invaders

Large, aggressive, prolific, ravenous Asian Carp are disrupting the food chain in the Great Lakes and could destroy the tourism and recreational value of the area.

So many of our bareboat charter customers hail from the Great Lakes region. While many choose to arrange Caribbean bareboat charter vacations in the winter and spring, the great lakes are filled with yachting enthusiasts all summer long.
Â
This great natural resource is the playground for people from many states, including New York, Michigan, Illinois, Wisconsin, Ohio and Pennsylvania. However, bareboat charter lovers as well as recreational fishermen and anyone who enjoys the region need to take immediate notice of a long-term threat to this area’s economy and environment: the invasion of Asian Carp.
Â
Last Friday, the freshman Senator from New York, Kirsten Gillibrand, demanded that the Army Corps of Engineers close off all of the Asian Carp-infested waterways leading to Lake Michigan. Ms. Gillibrand is the
first Senator to take a strong position and offer a realistic solution to this growing problem.
Â
As boat lovers, we need to speak up and support any and all efforts to save this incredible natural resource.Â Â

Following is a press release issued by Senator Gillibrand. After you read the release, please contact your own congressional representatives, and urge them to join the fight to protect the Great Lakes.
Â
December 11, 2009 – Washington, D.C. “The Asian Carp pose a traumatic and long term threat to the Great Lakes and the enormous economic benefit the lakes provide to New York and the nation,” Senator Gillibrand. “The lakes help drive our economy, draw tourism, offer endless recreation and provide drinking water for millions of families. The Asian Carp could potentially destroy all of that, disrupting the food chain and disturbing the natural ecosystem permanently. We need to take aggressive action now to stop the spread of Asian Carp and establish a long term solution that will keep New York’s waterways and natural habitats free from invasive species.”
Â
Senator Gillibrand called on the federal government to take immediate and bold action to stop this mounting threat. In her letter to the Department of the Army, Environmental Protection Agency, Coast Guard, and Fish and Wildlife Services, Senator Gillibrand wrote, “I encourage you to exercise all available options to ensure this threat is muted.
Â
Close Those Locks!
I urge you to close the O’Brian and Chicago Locks if there is reasonable evidence that Asian Carp have migrated above the barrier, continue the application of fish poison as a temporary management solution, and consider the possibility of permanent hydrological separation of the Great Lakes and the Canal. At a minimum, these efforts should include increased monitoring and sampling to map where Asian Carp are present, continued strategic application of rotenone as a short term management strategy, and changes in
the way the locks at CSSC are operated. I believe that temporarily sealing this waterway as we analyze the situation at hand and decide on a long term management strategy is a reasonable course of action.”
Â
Asian Carp are large, prolific and consume vast amounts of food – weighing up to 100 pounds and ranging as long as four feet – disrupting the food chain that supports native fish. Their large size, ravenous appetites, and rapid rate of reproduction pose a significant threat to New York’s ecosystem. This aggressive invasive species could destroy the Great Lakes fish populations, devastating the $7 billion recreational fishing industry, tourism industry and the general economic well being of the entire region.
Â
Ecosystem at Risk
The economy and the ecosystem of the entire Great Lakes region are at risk because of the imminent threat of the invasive Asian Carp. Current efforts to control the spread of Asian Carp include two electrical barriers around Chicago where the Mississippi River links to the Great Lakes.
Â
However, these efforts have fallen short, as illustrated by evidence indicating that Asian Carp may have migrated past the electrical barrier. The DNA evidence found implies that the Asian Carp may now be as close as 6 miles from Lake Michigan, 20 miles closer than previously thought. The invasion of Asian Carp into Lake Michigan is significant, since at that point they will have the ability to migrate to all of the Great Lakes.Â
Â
In addition, Senator Gillibrand announced that the bipartisan Asian Carp Prevention and Control Act, passed the EPW Committee today. This legislation would crack down on the importation and shipment of the bighead species of carp to help stop their spread throughout New York waterways, and help restore the natural order of our ecosystem.”

Thinking of chartering a bareboat yacht in the Caribbean, Florida Keys, Bahamas, South Pacific, Mediterranean, or elsewhere in the world?Â  We’d be honored to plan your tripÂ for you!Â

To arrange your next vacation on a chartered bareboat sail or motoryacht, contact your charter specialists at www.bareboat.com through our website at
http://bareboat.com/contact_us.html
by emailÂ via info@bareboat.comÂ
by phoneÂ via 1-800-BAREBOAT (227-3262) or 305-720-7245
or via twitter http://www.twitter.com/bareboatdotcomÂ  (Please follow us!)