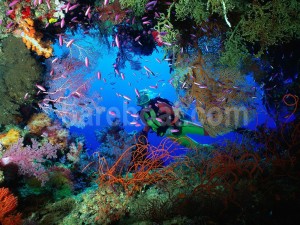 Learn to scuba dive in the BVI among the incredible reefs

For an exciting twist to your next Virgin Islands bareboat yacht charter, take a little time and learn to scuba dive.

Charterers spending time in Tortola, BVI can now take rendezvous diving and scuba education programs during their sail bareboat vacations, thanks to a new partnership with Sail Caribbean Divers, a PADI dive center.

Indeed, self-drive luxury sailing charter vacations combined with watersports such as snorkeling and diving can certainly fulfill such wishes.

A new diving reservation desk has been opened in Roadtown, Tortola, BVI at the Moorings bareboat fleet base. 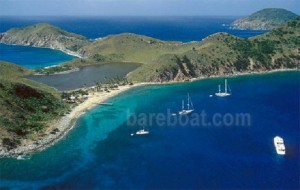 Certified divers can enjoy guided dives of incredible sites like the Wreck of the Rhone, a British ship that sank in 1867.Â Â  Novice divers can take a certification course or simply enjoy a short, introductory dive course.

Do you have a favorite diving spot in the Caribbean?Â  Tell us about it and we’ll share your tips with our readers. Contact us HERE

Once a hideaway for pirates and brigands, the BVI have only 17,000 residents – in contrast to the 100,000 people living in the American Virgin Islands (often referred to as the USVI). Caribbean yacht charter customers won’t find highrises or fast food on any of these islands, and theyâll find only a few posh resorts mingling with the more casual villas, family-owned inns, and funky beachfront bars and restaurants.

Tortola, Virgin Gorda, and Jost Van Dyke are the most developed and most visited islands. Cooper Island, Peter Island, Norman Island, Marina Cay, and Sandy Cay are less developed but are popular with day-trippers.Â  Most of the islands are all close to each other and close to the USVI, making island-hopping the mode for the BVI.

Tortola (Spanish for turtle dove) is the capital of the BVI.Â  Road Town, on the southern coast, is Tortola’s capital. The entire island centers around Road Town and its beautiful harbor businesses, luxury yacht charter marinas, restaurants, shops, pubs, and hotels.

Some fairly celebrated establishments such as Pusser’s Road Town Pub grace the streets.Â Â  A favorite watering hole for thirsty barefoot sailors, Pusserâs pours English Ale on draft and mixes up some tasty concoctions with its famous Pusser’s Rum.

On Tortola’s north shore is the busy but laid-back, Cane Garden Bay. This popular anchorage with its crescent-shaped beach has seen increasing crowds but has managed to hold onto its tradition of family-run inns, bars, and restaurants. Music is an integral part of Cane Garden Bay, and the friendly, open-air bars that line the water’s edge host local musicians whose island tunes can be heard floating across the bay.

Five miles from Tortola is Jost Van Dyke Island.Â  Known as the “party island” of the BVI, âJostâ has only 150 residents, but it has six bars! Life on Jost Van Dyke has been described as “one long island-style happy hour” with pig roasts, beach bars, and dancing in the sand. Foxy’s Tamarind Bar, an open-air ramshackle restaurant and bar has become a landmark and is undisputedly the most happenin’ gathering spot for boaters in the BVI. Owner Foxy Caldwood is famous for his parties, none moreso than his annual New Year’s Eve party, which made Time magazine’s list of “Top 5 Places to Spend New Year’s.”

At the western tip of Norman Island you will discover âThe Cavesâ – a popular spot with snorkelers and swimmers. The far northern cave is the most incredible –Â extending 70 feet into the mountainside.

Virgin Gorda is home to one of the Caribbean’s most amazing sights – exotic pools and grottos formed by gigantic granite boulders strewn across white sand beaches.Â  Known as âThe Baths,â this surreal natural wonder (and snorkeler’s dream) is one of the most visited spots in the BVI.

Nature’s Little Secrets are a secret no more!!