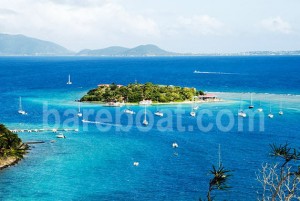 If you’re planning a Virgin Islands bareboat charter, new moorings await you – and they are FREE!

A dozen sand screw-style moorings have been installed in Christmas Cove, offÂ  St. Thomas, USVI. An additional 10 moorings will be installed next year.

Caribbean yacht charter enthusiasts have long known about this great anchorage.Â  A holiday raft-up in the mid 1950’s earned the scenic bay at Great St. James Island, off St. Thomas, the name, “Christmas Cove.”Â Â  It has become one of the most popular destinations in the U.S Virgin Islands for bareboat charter yachts, as well as local cruisers looking for an overnight anchorage.

In an effort to protect the seagrass beds – critical habitat for protected marine species like sea turtles, the local Fish and Wildlife Division of the Natural Resources Department came up with the idea to install moorings in this area.Â  Funds for the project have come from a Boater’s Infrastructure Grant.

Brochures with information about the moorings, their GPS coordinates, a map. and rules of use are available at St. Thomas, USVI marinas, or you can call 340-775-6762.

Use of the moorings is currently free – but the length of stay is limited to 10 days.